The President would sell his soul to Satan for just a few pesos.

From the Seattle Times - click here to read more...

President Bush praised Azerbaijan's president Friday despite human-rights problems documented by the State Department, and he said the country has a "very important role to play" in meeting global energy needs.

Bush met in the Oval Office with President Ilham Aliev, who succeeded his father 2 ½ years ago in a ballot that the State Department said suffered from "numerous, serious irregularities."

With Aliev sitting in an armchair next to him, Bush held out Azerbaijan as "a modern Muslim country that is able to provide for its citizens, that understands that democracy is the wave of the future."

The meeting demonstrated the difficulty the administration faces as it seeks to maintain U.S. access to oil and gas supplies from countries that may be unstable or unreliable, often because of corruption or human-rights abuses.

A year ago, the country celebrated the opening of a 1,100-mile pipeline from its capital, Baku, on the Caspian Sea, through Georgia and on to a Mediterranean port in Turkey. The event was important enough to the U.S. that Secretary of Energy Samuel Bodman attended.

The pipeline creates a link that avoids Iran, Russia and neighboring Armenia to carry 1 million barrels of oil a day to Western markets by 2008. 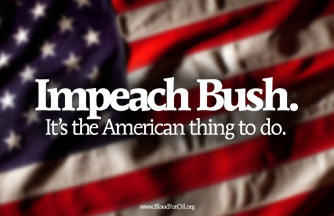