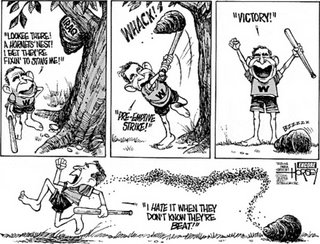 From the Boston Globe - click here to read more...

IN AN ARTICLE titled ''The Iran Plans," published in a recent issue of The New Yorker, Seymour M. Hersh -- who helped bring the Abu Ghraib prison scandal to light -- examines what appear to be well-advanced White House plans for a bombing campaign against Iran. Such bombing, according to his findings, might include the use of ''tactical" nuclear weapons, for it seems that Iran's recently elected president, Mahmoud Ahmadinejad, is a ''potential Adolf Hitler."

Though any story based on deliberate leaks is open to a certain skepticism -- who is doing the leaking; what is their real objective -- elements in Hersh's article ring a painful bell. He alleges that President Bush's ultimate goal in his confrontation with Iran is, once again, regime change and that the president believes that ''saving Iran will be his legacy."

Far from saving Iran, if he goes ahead with this plan, Bush will be hailed as the savior of Islamic fundamentalism. 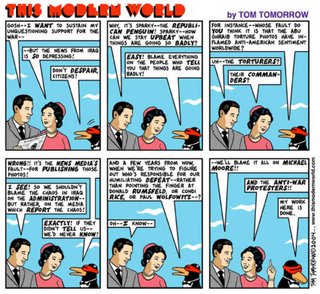