The Bush Administration - A Summary 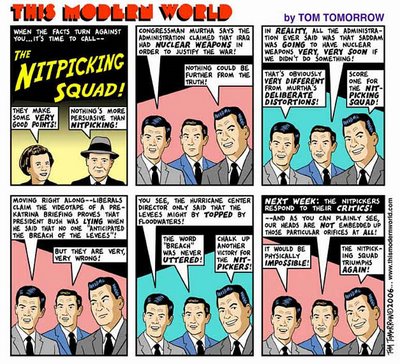 The following came in one of those forwarded emails. I thought it provided a pretty good summary of the state of affairs in the U.S. today, so I post it here...

We have a president, an administration, and a Congress which lie to us to justify their criminal actions, both at home and abroad. President Bush approved secret electronic surveillance and spying on American citizens without a judicial warrant. Under the 1978 Foreign Intelligence Security Act, such activity is illegal.

The president says he has the right, as "commander-in-chief in a time of war," to act in such a manner to protect national security and the American people against terrorists.

Bush says that if he calls a prisoner an "enemy combatant" he doesn't have to follow the Geneva Conventions or give that prisoner due process under the law, even if that prisoner is an American. The use of torture, approved at the highest levels of this administration, has been used on our "enemy combatants." Only the lowest-level operatives have ever been held accountable.

Bush also says he can sign a law passed by Congress and then issue a "signing statement," which says that he will make the determination of how that law is interpreted and applied. The president must believe that he is above the law and beyond checks and balances. Congress is complicit by not challenging this unbridled presidential power grab.

I defy any citizen to give an instance when this administration put forth an initiative, policy or program which put the public good ahead of that of big business or the wealthy. When issues of energy, health care, the environment, taxation, education, consumer protection, business regulation or going to war come up there is an industry insider helping this administration and Congress to formulate the legislation that will be most favorable to that specific interest.

We have been sold out by a government of the corporation, by the corporation and for the corporation. Unregulated capitalism is the antithesis of true democracy because it puts corporate profit ahead of what is good for society as a whole. Is a totalitarian, corporate, fascist state in our future? Wake up, America.

Author unknown - To protect the party who is guilty of excersising their democratic right by speaking freely - how sad.