Here's a summary, from the Baltimore Sun, of some of the Bush administration moves with regard to energy consumption in the U.S.

It's almost amusing to see President Bush vowing to get "aggressive on price gouging" at the gasoline pump.

If he takes a good look at why gas accounts for a growing share of the family budget, he'd find contributing factors in which he is more than a little complicit - and for which he has few solutions:

• Federal refusal to demand vehicles be as Fuel-efficient as possible, which could save millions of barrels of oil annually.

• Enactment last year of more than $2 billion in tax breaks to the oil industry and a continuing waiver of royalties for deep-sea drilling at a time of record-high industry profits.

• A federal emphasis on increasing domestic oil supplies that downplayed conservation efforts. Remember, it was Vice President Dick Cheney who said in 2001 that conservation "may be a personal virtue, but it is not a sufficient basis for a sound, comprehensive energy policy."

No wonder the nation has grown so dependent on this increasingly scarce commodity that, as Mr. Bush observed, the United States has little sway with unstable but oil-rich countries. 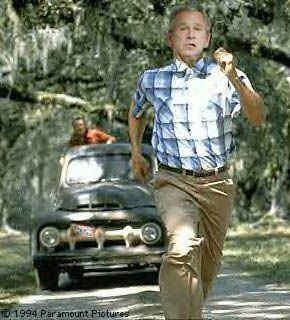