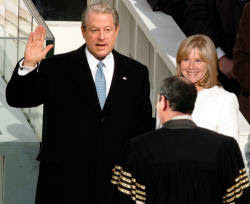 The Onion reports on one of most monumental rulings by the nation's highest court in the entire history of mankind. The first paragraph...

WASHINGTON—In an unexpected judicial turnaround, the Supreme Court this week reversed its 2000 ruling in the landmark case of Bush v. Gore, stripping George W. Bush of his earlier political victory, and declaring Albert Arnold Gore the 43rd president of the United States of America.

Read more by clicking here.
Posted by Bozo Funny at 6:40 AM