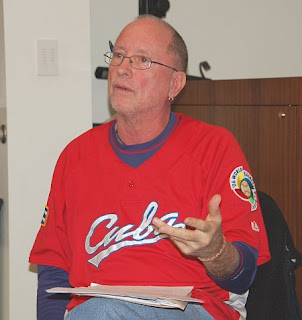 I got my first inkling of this piece from the J-Walk blog...

But the piece itself is posted in the New York Times Opinion Pages. Bill Ayers talks about himself and his role in the 2008 Presidential election.

I have regrets, of course — including mistakes of excess and failures of imagination, posturing and posing, inflated and heated rhetoric, blind sectarianism and a lot else. No one can reach my age with their eyes even partly open and not have hundreds of regrets. The responsibility for the risks we posed to others in some of our most extreme actions in those underground years never leaves my thoughts for long.

And later he says...

The dishonesty of the narrative about Mr. Obama during the campaign went a step further with its assumption that if you can place two people in the same room at the same time, or if you can show that they held a conversation, shared a cup of coffee, took the bus downtown together or had any of a thousand other associations, then you have demonstrated that they share ideas, policies, outlook, influences and, especially, responsibility for each other’s behavior. There is a long and sad history of guilt by association in our political culture, and at crucial times we’ve been unable to rise above it.