Matt Taibbi on the Election 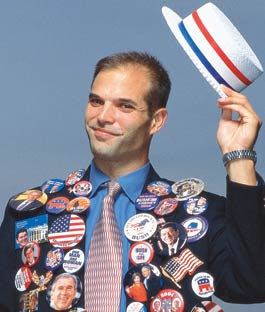 Matt Taibbi is a journalist for Rolling Stone and frequently appears on Bill Maher's Real Time. He's written a great article about the 2008 Presidential election.

Of all the problems facing this country by the end of the Bush years, the biggest is the absence of a unifying national idea. Since the end of the Cold War, America has been grasping left and right for an identity. We tried being a "world policeman" in Somalia, which didn't work so well. We tried retaining our Cold War outlook by simply replacing communists with terrorists. We created two bubble economies that blew up in our faces, and headed into 2008 a struggling capitalist state with a massive trade deficit and an overtaxed military that suddenly had to ask itself: For the supposed world leader in the community of nations, what exactly is it that we're still good at? Who are we, and what do we represent to the peoples of the Earth here and now — not in 1775 Concord, or 1945 Paris, or 1969, from the surface of the moon?

When Obama took the stage in Grant Park as president-elect, that question was answered. We pulled off an amazing thing here, delivering on our society's most ancient promises, in front of a world that still largely thought of us as the home of Bull Connor's fire hose. This dumbed-down, degraded election process of ours has, in spite of itself and to my own extreme astonishment, brilliantly re-energized the American experiment and restored legitimacy to our status as the world's living symbol of individual freedom. We feel like ourselves again, and the floundering economy and our two stagnating wars now seem like mere logistical problems that will be overcome sooner or later, instead of horrifying symptoms of inevitable empire-decline.

For this to happen, absolutely everything had to break right. And for that we will someday owe sincere thanks to John McCain, and Sarah Palin, and George W. Bush. They not only screwed it up, they screwed it up just right.