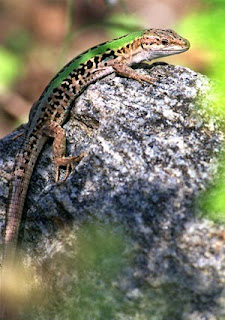 Were I only intelligent enough to fully understand the functioning of the human mind. So many of us are prone to beliefs that are based on emotional reactions to stimuli rather than to logical, fact-based stimuli. Just look at the millions of humans in the U.S. alone who buy into a belief in Creationism.

The evidence for evolution is so impressive that it's hard to believe how the human mind deceives so many.

National Geo has the story of a tribe of island lizards who were recently (in evolutionary terms) transplanted to a neighboring island and underwent rapid and dramatic evolution:

Italian wall lizards introduced to a tiny island off the coast of Croatia are evolving in ways that would normally take millions of years to play out, new research shows.

In 1971, scientists transplanted five adult pairs of the reptiles from their original island home in Pod Kopiste to the tiny neighboring island of Pod Mrcaru, both in the south Adriatic Sea.

Genetic testing on the Pod Mrcaru lizards confirmed that the modern population of more than 5,000 Italian wall lizards are all descendants of the original ten lizards left behind in the 1970s...